Even though Brent has said many times (even putting it in text in the software itself) that the sync function in NetNewsWire 2.0 beta needs work, I was wondering if anyone had figured out a work-around or cause of this bug.

It's keeping me from using NNW at work and it's bumming me out.

But this is cheering me up like a cheap, hollow chocolate bunny.

When I saw this picture on Matt's photo blog I hoped that he'd gotten an ACME bag for Christmas. But no, it was his wife Kay's. I've wanted an ACME looking bag for a while but they are a bit too feminine, I guess. I think I annoy my girlfriend with all the "Ooh, look at that bag! Too bad it's for women." I do when we're out shopping. If I were a woman I would probably own a lot of bags, probably as many shoes as I do.

The Wikipedia has settled quite a few arguments this Christmas. We just found out that Vinko Bogataj (the "agony of defeat" guy from ABC's Wide World of Sports) is alive and loves woodcarving.

My great-uncle was in The Battle of the Kasserine Pass and the Second Battle of El Alamein. It was cool to be able to read about something I hadn't planned on learning about.

I got some great presents this year, but the best had to be my dad healthy and back to his old self. After dinner our family drank tea and had Stollen while listening to Hawaiian Lap Steel Guitar.

My new obsession is the ITunes music store. Specifically the audio-books. I listened to Sun Tzu's "The Art of War" on the way to my parents' house. The text is freely available to be read online, and I've tried to get through it several times, but listening in the car turned out to be the best way to get through it. I also picked up a couple episodes of This American Life. I recommend this MacGyver themed one .

This song by Neil Cleary called "When All Of Us Get Famous" makes me a little sentimental. I'm no musician, but as a web tinkerer with aspirations of doing something grand, I can relate to what he's singing about.

Neil links this song on his site, so I think I'm okay offering it up. Please buy the album.

My job title changed three times. Anil saved my blog. Dropcash topped $20,000. Dropload is appearing in MacWorld and this web site would have as well if it weren't for the phrase "Damn Ass Hell Kings" used a few weeks back. I accepted money for an account on a web site I run. I'm telling you, it's been weird...

Watched my company's online Christmas card blow up. Experienced what it's like to be on the other side of ill-informed, self-righteousness (Onion headline: Old Man Thinks Website Was Designed To Target Him, Writes Blog Entry Concerning Vagisil's Confusing Imagery). The video is for our clients to laugh at and possibly get people to click over to our company site...which you did...and read generous portions of...which you did...and then you linked it...gee, that sounds like the marketing worked. 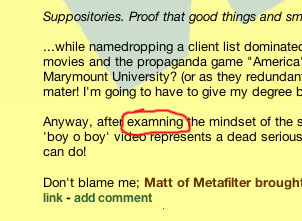 When you want to dress up and pretend to be Mr. Anti-Corporate Warrior, be sure to remove that Google banner from your site, Ché.

Me: Wow! This is cool, come see this!
Other Programmer: What?
Me: This, it's called Google Suggest. Watch, give me a phrase.
OT: Um.... um....
Me: Anything, it doesn't matter.
OT: Big. Bottomed. Girls.
I type it in and it auto-fills as I type...
Me: See?
He stares at it for a few seconds and then declares.
OT: It's filling in because you already searched for it!