The Curator’s Code (more) is a cumbersome solution based on a good intention. Attribution should be stored in the meta-data of a tweet or post, not in the post itself. Unstructured text only complicates the job of any software trying to make sense of these codes. 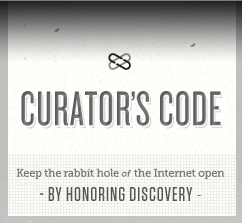 Twitter once promised to allow arbitrary meta-data in the form of “annotations”. The tools themselves could be encoding this within the post or tweet object for you rather than inserting into free text that can’t be parsed and aggregated. It’s too bad Twitter never did it, it seems like more and more we need meta-data to clear up the growing list of symbols and bad tech (URL shorteners) that clutter Tweets and blog posts.

Attribution and appreciation are good things! And we should seek to include them whenever we create/curate. But I think the execution of the Curators Code is flawed.

If anything the team that made this should petition Twitter and other publishing tools like Tumblr and Typepad to agree on a standardized method of encoding this kind of stuff in meta-data.

(By the way, I hooked up Typepad to my @andre_torrez Twitter account in case you would rather get notified of new posts there.)