I’ve been thinking about ad networks a bit more. Ad Tech is this week and an old co-worker stopped by my office and we ended up talking about them. Then Justin, another former co-worker at Federated Media, posted this discovery last night. (Justin and I talk about ad serving a lot. Too much probably)

So I had this idea. I think it is a good and simple one for normal people with weblogs.

Ad network for your weblog where all the ads all have your personal affiliate ID in them. Dropbox. Amazon. iTunes. Netflix. Etc…

The short of it is I like the idea of running a tasteful, small ad on my site like the ads from The Deck. But I realize using some fly-by-night penny ad network for punching monkeys really just opens you, my readers, to what those ads are really doing: tracking you with cookies. Or worse: installing malware. 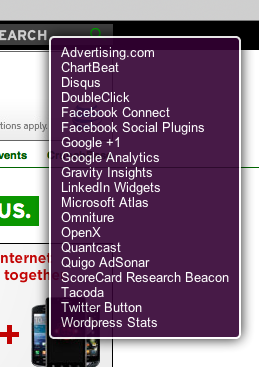 The old joke is nobody clicks ads, but the truth is their business is not just getting you to click an ad. Their business is to set or read a cookie (or allow another unnamed party who bids high enough to) and then sell or merge that information with other databases so they can really target you later on.

Install Ghostery and you will see some of your favorite sites (that’s Techcrunch on the right) are serving you a mess of tracking codes that you really don’t think about because it’s happening behind the scenes.

I have volumes I could write on the subject of ads, ad networks, and cookies. But the what this post is about is simply a desire for more options that work for everyone, publishers, advertisers, and readers. They are rare.