I think both are fine apps and I think they will do quite well with the tech world. Outside of it I can’t really say, I think I am too in the Valley to see out of it. But the things that caught my attention last week were:

Let me take a step back: I am trying to use my computer less. That is, I work on computers every day as that is what our business does, but outside of my time at the office I want to be on the computer less.

I have started learning about circuitry and playing my guitar more. I also pick my kid up after school and we go to a tumbling class (for him) or a park. I love my computers, but I love the rest of the world more. 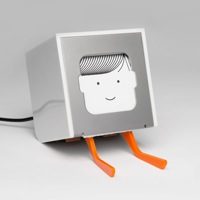 At first glance Berg’s Little Printer looks like it came from some alternative 1990’s universe where the Macintosh SE was not only wildly successful, it destroyed every other computer manufacturer on the planet. I have to admit 50% of why I care about this device so much is in the design of the product and the design of the site. The API documentation is also quite pleasing. I cannot wait to hook something up to their service and watch it go.

The other 50% is about what the printer does. Yes, it does use a thermal printer to print to rolls of paper you can find at your local office supply store. But that part is not really even core to what this is about. This is not about printing, it’s about BergCloud.

If you make things for people on the web and you take some time to read the API documentation the little gears in your head will start turning. This isn’t just a printer you print documents with. It is a content delivery service that doesn’t require a computer.

When you see the future you want you buy it; so I did. I hope to be submitting an app for acceptance to their service before they launch.

When a tiny thermal printer, no matter how cute, costs $260 something has gone badly wrong in mfg/design: kottke.org/12/08/little-p…

When smart people balk at the $260 price tag I don’t think they fully understand that part of that price goes towards access to the BergCloud service. I think if Chris wasn’t so focused on hardware entrepreneurs bootstrapping companies he’d be able to see the larger picture. There’s more than just cheap hardware here.

While it might be off-putting to know that there are some pretty steep walls around the BergCloud garden, I find the opportunities within service they built pretty exciting. There are so many reasons we dig our phone out of our pocket in a day that it’s fun to think we could cut some of those reasons out with a small disposable newspaper. And knowing that there will be a small well-vetted collection of apps that feed into that newspaper fits with the decluttering process I have been undertaking outside of work.

And it is cute.

Human.io is a different sort of thing. It is an iPhone app that provides an interface to people. Developers write “micro-applications” that can present questions or request work from people. Some have called it an “IFTTT for people” and I think that is somewhat true, but there is a lot more there that hasn’t been fully brought out. 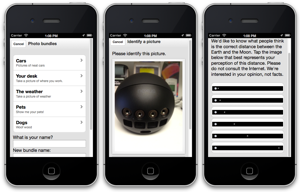 Human.io is made by Tasty Labs, makers of Jig. I think they have a similar problem that IFTTT in that this sort of human->computer/computer->computer software requires a lot of good documentation and plain English examples. IFTTT managed it with a really clear site that still took a few months for people to fully grok*.

I think Human.io is a bit more Mechanical Turk than IFTTT. The thing that MT was missing was what Human.io provides: a very simple way to construct micro-apps to present elements that extract work from humans.

I can’t even write about Human.io in a language that doesn’t end up sounding too geeky. It’s a hard thing to do and I wish them luck. It’s a very exciting service I just wish I had an idea to build on it. Every time I sit down to do it I come up completely empty and frustrated. The problem is I don’t have a need yet so I have to keep it in mind when I do.

Why I like it is that it creates an ecosystem for quickly gathering data from humans that can be statistically analyzed and used for larger purposes. Weathermob is an app that crowd sources not only the weather but your friends’ moods. This is a step up from something like that. You could build Weathermob on top of Human.io.

But you could also build a service to classify a set of images. Or you can geo-target interview questions. (I do wish they had a drawing UI element that let me ask people to draw things.)

I don’t want to sit at a computer and read conversations on web pages. I want to get out and do stuff. I feel like Little Printer and Human.io are going to help people do that.