Though I agree with Jason in that no summary will really capture what it was like because “you had to be there.”

I have been aware of the MakerBot and 3D printing for many years. Sometime in 2002 a friend mailed me a Klein bottle he secretly made on his company’s multi-million dollar machine. The curves of the bottle were made up of tiny segmented angles that when viewed from a distance looked like a smooth curve, but up close you could see where the computer was. It was very pretty and very fragile (oops).

This weekend among the toys, art, games, and electronics being shown in the Market there was a MakerBot working away on a watchband. In front of the device were some of the items it had made, and I was surprised to see that the plastic quality and accuracy was much better than I would have imagined.

You can still see those segments in this Klein bottle printed on a MakerBot. But the difference is that it is much cheaper to use and maintain.

But it still didn’t click for me. What clicked is when my friend told me how she got her new ring. She said she complimented someone on their ring at XOXO and that person just went and printed one for her. Now they both had the ring. 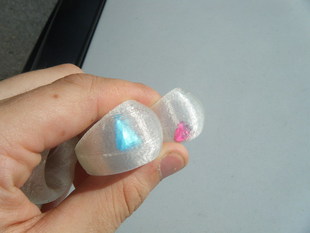 You can make one for yourself here.

Rather than thinking about the MakerBot as a printer or creator of objects. It feels more like one end of a doorway between computer models and physical objects. Sort of how printed (on paper) words as representations of text files can be OCR’d right back into the computer for archiving.

Anil Dash has already walked down this road. In his post a MakerBot (when paired with a 3d camera) could “teleport” your cool ring or wine stopper to a friend by scanning and sending the bits to their fabricator. Rather than thinking of it as a fax machine or simply a printer of new things, you can think of it as a kind of “teleporter” of existing things. Either from here to your friend over there or from here to yourself a few years from now.

It’s funny to me that I had read Anil’s post last year, but only after touching and seeing a MakerBot work did it really click with me. My mind has been racing with ideas of a future where you could scan all your possessions and archive them along with digital photos for unarchiving. All the chairs, salt shakers, lamps, computer keyboards, picture frames, alligator clips, and stuff you keep around because you might need it someday could be archived on disk in case you do need them someday.

I really, really want a MakerBot.