This year I will be listening to music from 1987. It looks like a good year. My wife and I went down that list talking about the bands that we loved and others we didn’t yet know. 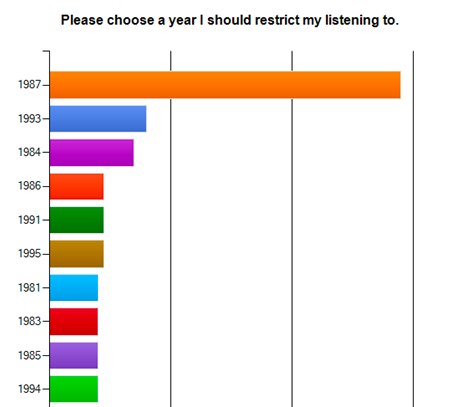 After clearing off my whole collection on Rdio I downloaded Guns N' Roses’ “Appetite for Destruction”, Prince’s “Sign ‘☮’ the Times”, and Dinosaur Jr.’s “You’re Living All Over Me”.

In 1987 I was VERY aware of Guns N' Roses and Prince due to MTV, but I wouldn’t discover Dinosaur Jr. until I got to college a few years later. “You’re Living All Over Me” is very likely one of my 20 favorite albums of all time. The other two I haven’t heard since they were popular. I am curious how the stuff I continued to listen to (Dinosaur, Sonic Youth, The Jesus and Mary Chain) compares to the stuff I left back in 1987 (U2, REM, Depeche Mode).

It wasn’t until this morning that I realized how fun this project is going to be. Just flip through that list above: Public Enemy’s “Yo! Bum Rush the Show”, Big Black “Songs About Fucking”, The Replacements, the whole very underground Industrial genre I never really paid attention to…