As I backed out I raised my hand to push the button on the garage door remote. The homeless man who had been laying next to our garage thought I was waving at him and he gave a small wave back. Instinctively my hand, still raised after pushing the button, gave him a wave. It was a long wave. Longer than was called for and with a familiarity I would reserve for a friend. And he, looking uncomfortable with the realization of what was happening, gave a second wave back to me. By then I had backed out as far as I needed and turned my attention to the road.

Tweenbots are robots that navigate the city by the help of the people they meet. The video is very sweet.

I made this drum machine with Cocoa. You can edit your loops in a text editor. I made it because I like the idea of using text editors (specifically TextMate) and not point-click interfaces like Garage Band.

It "works" in that I can demo it, but I need some help from an expert at Core Audio to make it really work. Right now there's a few problems with timing that I can't get past given my nearly complete ignorance of the subject.

If you know anyone that can help me, I'd appreciate it if you sent them my address: andre at torrez.org.

What the web was made for! Tracking the revolutions of a hamster wheel and converting them to miles. If the hamster ran as, uh, the crow flies, this is how far she'd go. Hamster Across America

A disposable camera is left on a bench for a day with instructions to passers-by to use it. They did. found on andrew pile's reverse-chronological thing

This week Jason linked to an article which claimed it was possible to "unboil" an egg by unrolling the protein molecules (yuck). At work we all turned around in our seats, argued about it for a bit and then went back to work. Agreeing that even if it was possible we wouldn't want to eat it.

Michael Pusateri, a man with a long history of documenting his experiments and projects, decided to try it.

It's only Thursday and I already have my weekend project laid out for me. I've been toying with Erlang for a while, dropping it for a month or so only to pick it up again. I haven't written anything of any size, but now that the wedding is over I'm going to dive back and and build a little test app, possibly deployed on EC2. 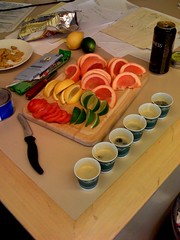 The Results of The Miracle Fruit
Originally uploaded by torrez
Today in Tech we sampled Miracle Fruit. It was very interesting, at times completely weird, but it's not quite a "miracle".

Click the photo to see how Miracle Fruit converted some of these items.

So the other day I ranted a bit about having to commute into work as it represents 2/15ths of my day that is not always pleasurable. I also included the fact we're experiencing a fair amount of noise at work, and so I poked at the problem a bit publicly here until I can figure that out. It bothers me, the commute and the noise.

A few days ago I switched from my Converse shoes to my Campers (trust me, I'm going somewhere with all of this) because I was starting to get a dull ache in one of my foot's arch. Converse, as you know, offer as much support as a box of dry leaves, and Campers are pretty awesome Spanish, city walking shoes.

While walking down to BART with the Campers something odd happened. My foot started to hurt way more. I had to stop walking to give my foot a rest. About halfway there, I had to begin walking with my foot markedly pointed inward as the way I was walking was so painful.

And a few steps after that my foot stopped hurting all at once. In fact it felt really good for the first time in a while. The Campers have very good arch support and I think what happened is my foot was getting lazy in the Converse and I'd started to alter my walk to support myself, which didn't work very well in the Campers. At first I thought, "Oh shit, my foot is even WORSE than it was before!" but as soon as I realized it was better, I was happy...though I still wished I could wear my Converse as they were a lighter, simpler shoe. Plus black. I like black. And simple. I like simple.

A huge part of web development for me is asking the question "Why does it hurt?" and then thinking about not only how to fix it, but how to solve the problem in a way that provides what someone actually wants. Too often feature driven projects end up spiraling into something everyone likes but nobody loves: 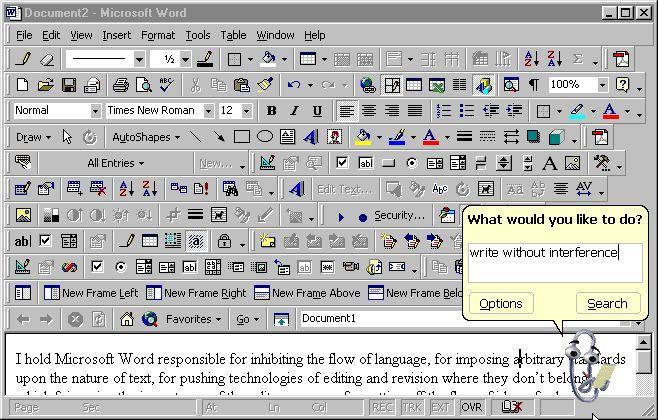 That kind of development is where you make a list of every request people have made and then tick them off like a todo list. Your email inbox becomes your task list. Your whole reason for developing is translating someone's description of the problem and how to fix it into code. I don't like to work like that. Feature driven development is poisonous and leads to unnecessary back-end complexity. In this way Flickr is my hero. Nobody does it better than they do when it comes to adding features people actually want and need versus throwing every idea at the site and seeing what sticks.

So going back to my shoe, my problem was I liked how my Converse looked but I needed the support of the Camper, even though the red and orange clashed a bit too much with my pants.

Rather than just solve the problem with my aching foot, I solved the problem of what I really wanted. 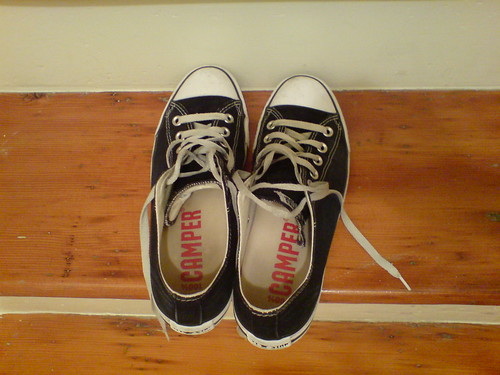 Going back to my commute and noise. What do I really want? I don't know yet. The simple answer would be to move all of our desks to another part of the office and close the door. And buy a car. But buying a car is almost exactly what I don't want to do as it's way to expensive to keep garaged, with insurance, and maintenance, and of course the environment is not particularly enthusiastic about the pollution. Plus this is "Year of The Wedding" which means spending money on things that we can't really afford means less chocolate cake for everyone this December and nobody wants that.

Maybe these are the answers. I don't know yet. I need to think about it a bit more. I'll figure it out, though, I know that.