Huh, this bar is a couple blocks from my house. I missed this news this year: Mad Dog Installs California’s First Self-Serve Beer Table. 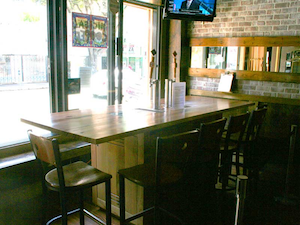 If you’re a San Francisco Haight or Haight-adjacent resident, Haighteration published their biggest stories of 2011. Lots of fires, unfortunately.

Via my new favorite weblog: TasteLand

Here's a guywoman drinking at every bar in San Francisco.

SirMa'am, you are a hero.

(That's what I get for assuming, I get to use the strike tag.)

One of the things I have enjoyed about living in Northern California is what feels like access to much better, fresher beers than I was used to down south. There were plenty of places to buy beer, even craft beers in Los Angeles, but I think because I walk so much in my neighborhood and frequent liquor stores instead of Super Markets I come across many of the local stuff I would have missed.

This article on CHOW about Sierra Nevada Brewing makes me happy for two reasons. The first is that I also, frequently (like right now) have a six pack of Sierra Nevada Pale Ale in my refrigerator.

The second is that after about two years of going a little crazy with super hoppy beers and sour beers and beers that make you want to take a nap afterwards, I think I've started to come around to the idea of subtle beers that are good because they are well balanced, and not trying to differentiate themselves with a bit of a gimmick.

That said, I usually have a fresh Pliny The Elder in my fridge as well. Shoving your nose into a big glass of Pliny is a bit of heaven I think.

You are going to eat a cheeseburger for lunch.

I LOVE this post on Serious Eats. I am a hamburger FANATIC. I want one now but it's time to sleep.

The Story of Beer. Nicely drawn, tons of information about beer. Now I want a beer.

I've enjoyed watching my friend at work unravel a cookie recipe mystery over the past couple of weeks. He just posted the full story to his weblog.

He also brought in a batch which are VERY GOOD COOKIES. You should totally make some.

Why NYC's Iconic Pizza Is So Tough To Replicate found on kottke. Seriously, there is no good pizza in San Francisco. Whenever I go to NY I manage to get at least one slice of pizza from a random shop, and it's better than any pizza I've ever had in California.

If you think you know, please leave me a comment. You should know that I have been to Delfina, Arinell's, Little Star, and A16. (SF does make a god damn good burger though.)

Alex on beer in the Bay Area. Amber and I got way more into beer in 2007 than we ever were, especially after our trip to Amsterdam and Belgium where a friend gave me a long list of beers to try. I regularly make trips to Plumpjack down the street to grab our favorites plus anything I may have heard of (or maybe haven't).