“One day, I went to work — I live in SF and I have to commute to Mountain View and there are these shuttles — I went to the shuttle stop and I saw a line of not 10 people but 15 people standing in a row like this,” she puts her head down and mimics someone poking at a smartphone. “I don’t want to do that, you know? I don’t want to be that person.” 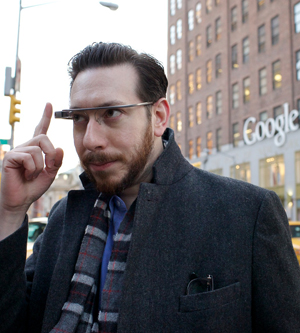 On using it: First you have to touch the side of the device (which is actually a touchpad), or tilt your head upward slowly, a gesture which tells Glass to wake up. Once you’ve done that, you start issuing commands by speaking "ok glass" first, or scroll through the options using your finger along the side of the device. You can scroll items by moving your finger backwards or forward along the strip, you select by tapping, and move "back" by swiping down. Most of the big interaction is done by voice, however.

via “I used Google Glass: the future, with monthly updates”

The difference is, of course, I can put the phone in my pocket the second you start talking to me. It is not part of our conversation and there is no screen alerting me to a new message or enticing me with some video. Putting the phone in my pocket is a way to say, “Okay it’s just you and me talking now.” But wearing that computer on your face is a reminder that, well, you have a damn computer on your face.

Now, don’t get me wrong: I would love to play with a Google Glass! I would love to put it on and walk around the city. I would LOVE to write software for it. I just think it’s claiming to be a replacement for something it is not. 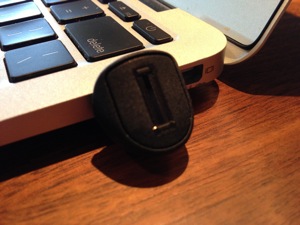 Mat Honan is at CES. Do not miss this stream of consciousness post about his day. Gadgets!

Don’t you wish you had this list before you went shopping this Christmas? Easily one of my favorite sites of 2011. Wirecutter is the place I go first for researching stuff I might buy.

I am seriously not into wands 'n shit, but I love the creativity behind turning a wand into a remote control by programming gestures into the thing so you can control your TV.

Leonard writes the sort of update I wanted to write after my time with the Android phone. Unfortunately, I didn't make it that far with the Android G1, but now I'm thinking of giving the Pre a chance.

I had switched to a Google G1 "Dream" phone for a month. I felt like writing about it.

I give up. I thought it'd be fun to see what life was like on a different platform but I think I've seen more than enough on this hardware. The device is definitely too slow to get anything done and I have found myself not going to the phone when in a situation where I used to check my mail and catch up on Twitter. I stood in line at the ATM and just didn't bother.

My friend Omar pointed me to an excellent review of the iPhone and Android keyboards side-by-side. It's a great examination of the differences and the conclusion is spot on.

One thing I didn't anticipate having with the G1 and Android was the ability to run arbitrary applications in the background. The iPhone runs a few select applications behind the scenes: email silently synchronizes, your calendars and contacts can synchronize with Mobile Me, and of course there's the new feature in 3.0 that allows applications to push data to your phone in the form of alerts. Really good stuff, but it would be nice if some of my most used iPhone applications didn't have to unpack their previous state every time I switched to the app.

Before the iPhone arrived I was a very happy Ericsson k750i user. It was fast, I was pretty good with the number pad, and Google Reader worked really well on it. The coolest thing it did was in-camera photo stitching (example 1, example 2) and the damn thing had a 2MP camera that also shot video. Oh and computer tethering worked right out of the box. This was early 2007.